In Spring 2021, at the height of the pandemic, a 36-year-old man afflicted with brain cancer became an online influencer. Ethan Sisser inspired thousands around the world with his humble, conscientious, and grateful approach toward the dying process. His wish was to offer the world a reimagined vision of death.

Ethan invited us to make a film about his journey, to present an alternative approach to death. The result is a deeply intimate sensory immersion into Ethan’s journey as he receives community-centered end-of-life care, a home funeral and green burial. 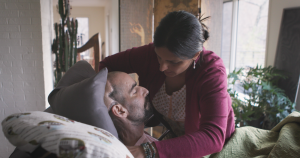 Jessica Zitter, MD, MPH, is a filmmaker focusing on personal stories that address the way people die in America. Past media include the Oscar-nominated “Extremis,” which is currently streaming on Netflix, and “Caregiver: A Love Story,” which won Best Documentary Short at the San Francisco Jewish Film Festival. Her essays have appeared in the New York Times, Time Magazine, The Atlantic, and the Huffington Post. She has been a guest on “Fresh Air” with Terry Gross, “Doctor Oz,” and CBS Sunday Morning. In addition to making media, Dr. Zitter is the author of Extreme Measures: Finding a Better Path to the End of Life. Dr. Zitter attended Stanford University and Case Western Reserve University Medical School and earned her Master of Public Health at the University of California, Berkeley. Her medical training includes an Internal Medicine residency at Harvard’s Brigham and Women’s Hospital and a fellowship in Pulmonary/Critical Care at the University of California, San Francisco. In 2005 Dr. Zitter co-founded Vital Decisions, a telephone counseling service for patients with life-limiting illnesses. She practices at the public hospital in Oakland California.